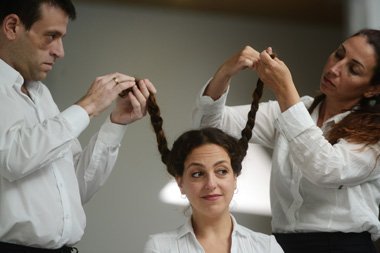 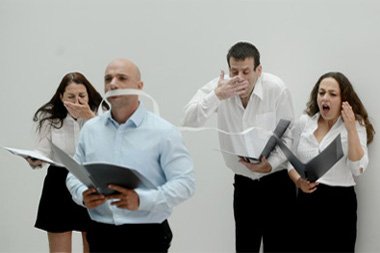 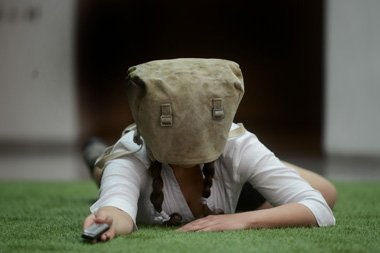 “I would like to thank you for the meaningful experience that I had, thanks to you… We, the survivors, return during the commemorative ceremony of “Gat ha’Amakim” to the most joyous days of our lives, when our youth became one with the youth of the nation, and our wishes became fulfilled through taking care of the needs of the community”.
(From a letter of Nathan Cohen, sent to the Cameri Theatre actors, after watching the second, 1956 production of the show “He Walked in the Fields”).

Sixty-five years has passed since the premiere of “He Walked in The Fields”, in May 31, 1948, in the midst of the War of Independence. The entire Jewish community of the young state of Israel was moved by the heroic death of Uri, the first Sabra (Israeli born son) who spoke Hebrew without a foreign accent on the stage of the Cameri Theatre. But why stage it today? Does anybody still care? Is there a point, after all these years and numerous heroic deaths, in returning to the story of Uri and Mika, Willy and Rutka? Before attempting an answer, we should first explain what we mean by “He Walked in the Fields”. Under this title are to be found two different texts: the novel written by Moshe Shamir in the years 1945-6, and the play, also written by Shamir, based on the same novel, at the beginning of 1948. At first sight, it is the same story, about the young man who returns from the agricultural boarding school to his kibbutz, Gat-ha’Amakim, falls in love with Mika, the holocaust survivor who was brought to Palestine by his father (Willy), joins the Jewish paramilitary units (Palmach) and gets killed. However, these are two very different texts.

The novel was written when Shamir was a member of kibbutz Mishmar ha’Emek, during a relatively calm period in the life of the Jewish community in Palestine, when one could take a dispassionate look at the new society that was created under the influence of the Zionist outlook. The novel of Shamir condemned that society – the generation of the parents, but especially the generation of the children, the celebrated “Sabras”. Uri, the first born son of the kibbutz, returns home from the agricultural boarding school, but does not find his place: his family disintegrated, the kibbutz members regard him as a second-rate copy of his father, and he is torn between his obligations to his pregnant girlfriend and his comrades of the Palmach.

Uri is haunted by a death wish, and not being able to make up his mind, he is moving back and forth between the different worlds, until he takes his life in a seemingly heroic act. The novel also criticizes in an indirect manner the Zionist project, which aimed at creating in the “land of Israel” a new Jew, strong and determined, self-confident and brave – but also submissive and obedient to the directives of the movement. Shamir exposes the inner-contradictions of this figure, and presents it as an empty vessel, conscious to its own problematic identity.

Shamir, who had left his kibbutz in 1946, submitted in 1947 his novel to Sifriat Poalim – the publishing house that belonged to the movement of the kibbutzim. The publisher printed the manuscript, but in the end refused to publish it because of its critical stance. The novel was finally published thanks to Joseph Milo, the director of the Cameri Theatre, who asked Shamir to adapt his novel into a play at the beginning of the War of Independence. The latter, who was under the influence of the war and the death of his younger brother (22.1.1948), agreed and together with Milo adapted the novel, while completely changing its meaning. The realist-psychologist dimension of the novel, and the emphasis on the inner crises of its protagonists, had almost disappeared. The play had, instead, a discontinuous, Brechtian-like structure, with a focus on the military, collective activities of the Palmach units. It was framed as a commemorative ceremony, and its critical edge was replaced by the cult of the Hebrew soldier, whose faults were forgiven once he had sacrificed himself for the fatherland. The novel was published two weeks before the premiere of the play, and as a consequence the difference between them was blurred at that period. However, even later, Israeli society preferred to regard itself through the flattering lens of the play, and not the critical one of the novel. The play was staged several times – in 1956 (the Cameri Theatre), 1966 (Haifa Theatre), 1997 (Beer Sheva Theatre), 2008 and 2013 (Bet Zvi Theatre), and was also adapted for the screen (1967, directed by Milo, with Assi Dayan in the principal role). In each of the productions, the play was staged in the same manner as in 1948, with an emphasis on the heroism of the young protagonist.

The current production is a new version of “He Walked in the Fields”, based on a text that combines excerpts of the novel and scenes of the play. While the original play spoke in a single voice, this production speaks in a plurality – of voices, of gazes and of points of view. The return to the novel enables us to bring Uri down from the pedestal, to clean the dust off from the heroes of the 1940s, and to bring out the actuality of Shamir’s novel. His critical position is important today as well, as we are facing the Zionist project, which has remained the same military and national endeavor. Until now we have been walking in the furrows; it is time to begin walking in the fields.