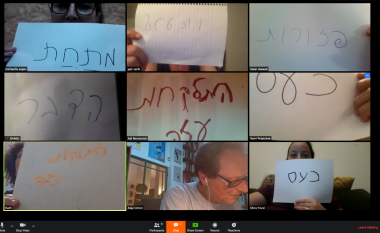 A gathering to shake up some thoughts along with joined reading sessions:

Prof. Ati Citron talks about the wonderful text of Antonin Artaud – The Theater and the Plague*

“The plague takes images that are dormant, a latent disorder, and suddenly extends them into the most extreme gestures; the theater also takes gestures and pushes them as far as they will go… like inflammatory images thrust into our abruptly wakened heads, the theater restores us as our dormant conflicts and all their powers… In the true theater a play disturbs the senses’ repose, frees the repressed unconscious, incites a kind of virtual revolt…”

* The Theater and Its Double by Antonin Artaud, translated from the French by Mary Caroline Richards