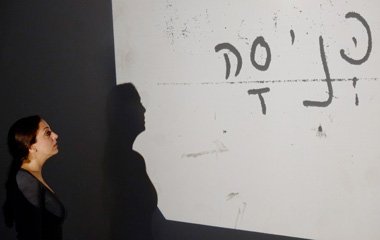 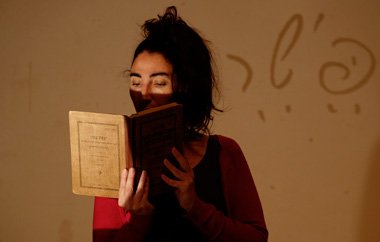 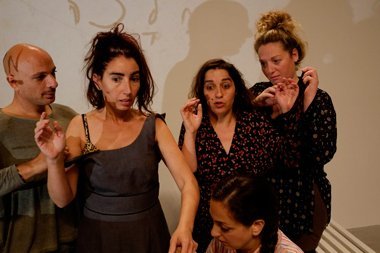 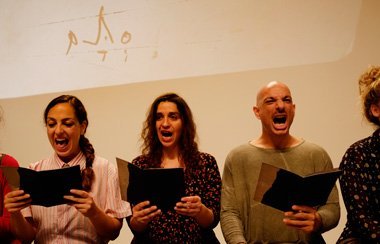 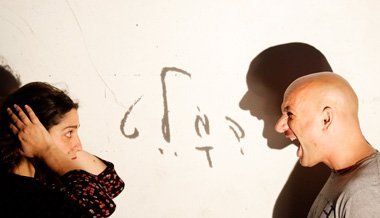 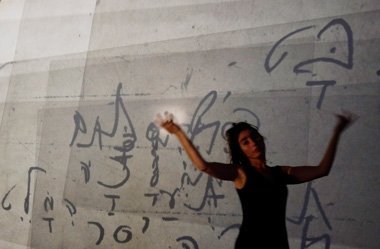 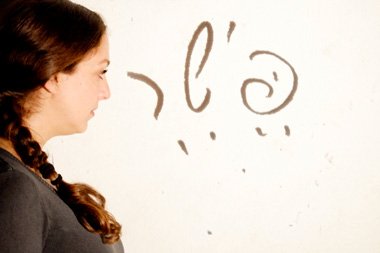 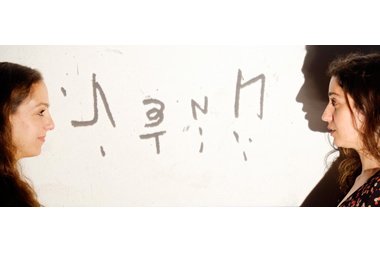 And other stories by Franz Kafka

… If only it were enough to lay down one word and if it were possible to quit with the quiet realization, that that particular word was totally full of your very essence.
Frantz Kafka, Diaries, 1910
The texts:
The Hebrew Notebook (The National Library archive)
Excerpts of the Hebrew textbook (of which Kafka learned) “The language of our people” by Moshe Rat
Out of the Octavo Notebooks: Two fragments
Out of A Country Doctor: An Old Page and Jackals and Arabs

About "The Hebrew Notebook" >>

In a thin blue notebook dwelling in the depths of the archive of the National Library in Jerusalem, Hebrew words accompanied with German translations are exposed, written in Franz Kafka’s handwriting. The unexpected vocabulary constitutes a starting point for a theatrical composition in which the actors of the Theater Group attempt to give an interpretative arena to Kafka’s world of Hebrew words.

Kafka’s entire work constitutes a code of gestures which surely had no definite symbolic meaning for the author from the outset; rather, the author tried to derive such a meaning from them in ever-changing contexts and experimental groupings. The theatre is the logical place for such groupings.

Walter Benjamin
By the act of reading out the notebook, we attempt to give an arena to the individual word, denuded of context and meaning, as in the case of the gesture; looking for possibilities of constructing and dismantling, creating sequences of words that almost add up together to a story and then disintegrate again into fragments of verbal raw material. Sometimes we search for a personal meaning in the words, sometimes we try to guess in them a layout for a letter or a short story and sometimes we direct the attention to a mismatch between the meaning of the word in Hebrew and its translation into German.
Parallel to the reading performance, the artist Guy Sagi is screening the words images in an independent time line. Sheer random play between the spoken word and its visual image bestows a dimension of uncertainty on the whole reading event.
The words of the Notebook continue echoing in some short texts of Kafka – all written in 1917, the year in which Kafka began his Hebrew studies. They, too, are engaged with ancient, strange, wondrous extinct communities, eradicated or eradicating, struggling for their own lives.

A Sentence of No End / Galili Shahar >>